spreading the word – I just want to direct your attention for a minute or two to a wonderful ongoing project by Ann Hamilton:

Cloth is the body’s first architecture; it protects, conceals and reveals; it carries a body’s weight, swaddles at birth, covers in sleep and in death. A patterned cloth symbolizes state or organization; a red cross stitched onto a white field is the universal sign of aid. A white cloth can be a ghost, a monster or a truce. John Constable described the sky in his paintings as a ‘white sheet drawn behind the objects.’ When we speak of its qualities, we speak of a cloth’s hand: we know it through touch. Cloth is the hand that is always touching. Its felt experience is evoked and described by the other hand that we always inhabit, that of language.

Commonplacing was once a verb that referred to the process of copying out and managing selections from one’s reading. In antiquity the practice originated in loci communes, or “common places,” under which ideas could be collected for use in different situations. Commonplace books flourished during the Renaissance and early modern period when students and scholars were encouraged to keep commonplace books for study. Printed commonplace books offered models for organizing and arranging excerpts. Wallace Stevens, Ralph Waldo Emerson, and W.H. Auden all kept commonplace books. The practice, “commonplacing”, continues as technologies and social media platforms expand. 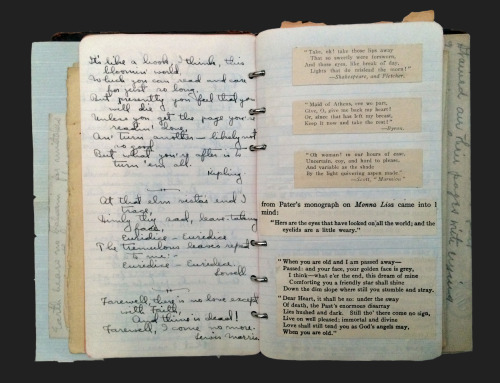 (and why a commonplace book is very similar to a blog)

A commonplace book is a central resource or depository for ideas, quotes, anecdotes, observations and information you come across during your life and didactic pursuits. The purpose of the book is to record and organize these gems for later use in your life, in your business, in your writing, speaking or whatever it is that you do.

Commonplace books were/are essentially scrapbooks filled with items of every kind: medical recipes, quotes, letters, poems, tables of weights and measures, proverbs, prayers, legal formulas. Commonplaces were/are used by readers, writers, students, and scholars as an aid for remembering useful concepts or facts they had learned. Each commonplace book was unique to its creator’s particular interests.—Wikipedia

A commonplace book is not what you might expect from the name. Rather than something ordinary, a commonplace book is a journal or notebook in which a student, reader, or writer compiles quotations, poems, letters, and information, along with the compiler’s notes and reactions. Students from the 1600s through the 1800s were required to keep commonplace books as learning tools.—Library of Congress

Want to know more? Have a look at: