Lately I have spent more and more time looking at photographs. I have also, as you might have noticed, started to spend more time making my own. I don’t view my own pictures as art, but would rather call it a kind of documentary; a visual diary, perhaps? And I’m not especially interested in the genre called art photography either. What interests me the most, are pictures trying to capture our world from a new point of view. And I love work that manages to capture the beauty of derelict places.

As for example seen in the work of Christopher Payne. Here is how he himself present his most famous project: Asylum 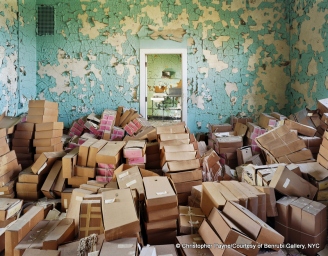 Asylum – Payne in his own words:

We tend to think of mental hospitals as “snake pits”—places of nightmarish squalor and abuse—and this is how they have been portrayed in books and film. Few Americans, however, realize these institutions were once monuments of civic pride, built with noble intentions by leading architects and physicians, who envisioned the asylums as places of refuge, therapy, and healing. For more than half the nation’s history, vast mental hospitals were a prominent feature of the American landscape. From the mid-nineteenth century to the early twentieth, more than 250 institutions for the insane were built throughout the United States; by 1948 they housed over half a million patients. But over the next thirty years, with the introduction of psychotropic drugs and policy shifts toward community-based care, patient populations declined dramatically, leaving many of these massive buildings neglected and abandoned.

From 2002 to 2008, I visited seventy institutions in thirty states, photographing palatial exteriors designed by famous architects and crumbling interiors that appeared as if the occupants had just left. I also documented how the hospitals functioned as self-contained cities, where almost everything of necessity was produced on site: food, water, power, and even clothing and shoes. Since many of these places have been demolished, the photographs serve as their final, official record.

Asylum: Inside the Closed World of State Mental Hospitals was published by MIT Press in 2009 and includes an essay by the renowned neurologist Oliver Sacks.

Christopher Payne specializes in architectural photography and the large format documentation of America’s industrial heritage. Trained as an architect, he is fascinated by design, assembly, and the built form. His first book, New York’s Forgotten Substations: The Power Behind the Subway (Princeton Architectural Press, 2002), offered dramatic, rare views of the behemoth machines that are hidden behind modest facades in New York City. His second book, Asylum: Inside the Closed World of State Mental Hospitals (MIT Press, 2009), which includes an essay by the renowned neurologist Oliver Sacks, was the result of a seven-year survey of America’s vast and largely shuttered state mental institutions. Payne’s new book, North Brother Island: The Last Unknown Place in New York City (Fordham University Press, 2014), explores an uninhabited island of ruins in the East River. Payne’s photographs invoke the former grandeur of the site over different seasons, capturing hints of buried streets and infrastructure now reclaimed by nature, while also providing a unique glimpse into a city’s future without people.

Payne’s recent work, including a series in progress on the American textile industry, has veered away from the documentation of the obsolete towards a celebration of craftsmanship and small-scale manufacturing that are persevering in the face of global competition and evolutions in industrial processes. Nearing completion is Making Steinway: An American Workplace, a tour through the famous Steinway & Sons piano factory in Astoria, Queens. Here a team of skilled workers creates exquisite instruments considered to be some of the finest in the world. Payne captures moments of the choreographies of production, and inspects the parts and pieces of the instruments that will never be visible outside of the factory, telling a story of intricacy, precision, and care he fears is becoming all too rare in the American workplace.

Payne has been awarded grants from the Graham Foundation, the New York State Council on the Arts, and the New York Foundation for the Arts. His work has been featured in publications around the world and several times in special presentations by the New York Times Magazine.