In the early 1960s, Agnes Martin’s geometric compositions evolved into what would later be seen as her signature style: the square grid. Referring to these paintings, the critic Lucy Lippard described them as ‘legendary examples of an unrepetitive use of a repetitive medium’.

More and more I excluded from my paintings all curved lines, until finally my compositions consisted only of vertical and horizontal lines. 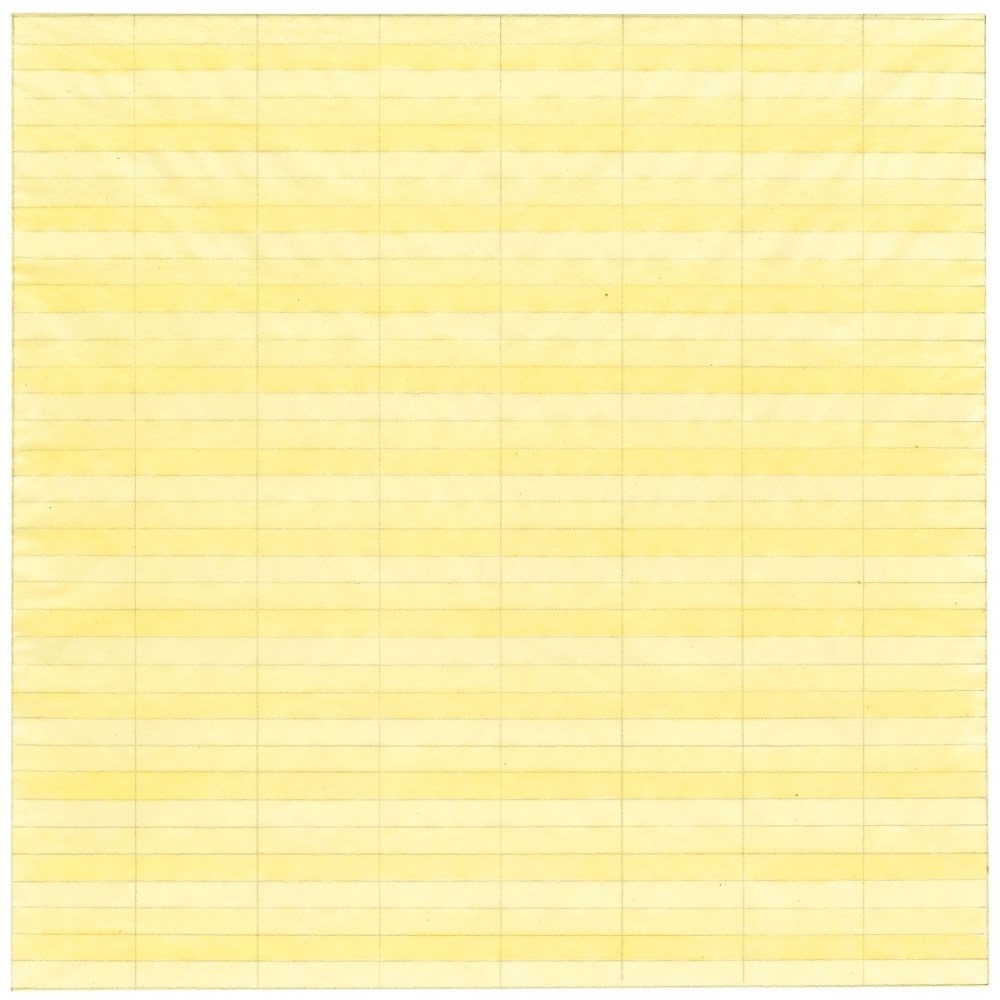 “Simplicity,” said Martin, “is never simple. It’s the hardest thing to achieve. I’m not sure the West (the Western culture as opposed to Zen-traditions) understands simplicity.” For Martin, her quiet gestures and numinous colors are a distillation of the intuitive “beauty” and “perfection” inherent in nature and the mind.

There are some very good books on Martin, and several texts by Agnes Martin on her own work. They all talk about how she developed into simplicity, often underlining the complexity of simplicity. But there is this thing that interests me which isn’t talked about that much – it has to do with reception, with Martin’s work seen from the publics point of view, not from the theoretician or the art-historian’s view-point. I’m interested in Agnes Martin from the “accidental viewer’s” point of view  …

Why do some of us experience her art works as if they were sacred rituals, while others couldn’t care less? How do we connect emotional to art as abstracted as this?

Long looking at paintings is equivalent to being dropped into a foreign city, where gradually, out of desire and despair, a few key words, then a little syntax make a clearing in the silence. Art, all art, not just paintings is a foreign city, and we deceive ourselves when we think it familiar. No one is surprised to find that a foreign city follows its own customs and speaks its own language. Only a boor would ignore both and blame his defaulting on the place. Every day this happens to the artist and the art.

We have to recognise that the language of art, all art, is not our mother-tongue.

Essays on ecstasy and effrontery, 1995

I think Winterson has created a very useful image of what art looking could – should – be like. I very much like that she challenges us, the viewers; it’s not about having all kinds of background information about the art you see, it’s not about trying to decode a secret message – getting it right. It – looking at art – is about quieting down, listening, letting the art speak – be willing to not understand, but still try.

There is no theory to explain it all, what matters is the meeting; you and the work of art, and what is created between you – .

Geometry has nothing to do with it. It’s all about finding perfection and perfection can’t be found in something so rigid as geometry. You have to go elsewhere for that, in between the lines.