I am about to start working on an essay on the painter Agnes Martin.

Due to … life … I will not get to see the London exhibition until September, but I have seen some of Martin’s work before. The first time at Documenta 12 in Kassel, 2007.

I’m deeply moved by her work. I think of her paintings and drawings not primarily as pictures, but more like meditations. Like timeless events of serene tranquility.

I recently learned that Martin was diagnosed with paranoid schizophrenia in early adulthood. Those of you who have been reading this blog for years, might remember that I – a decade ago – worked on a research project studying language in psychosis. Trying to find out more about how being psychotic affected one’s language skills. I have since abandoned both research and the field of psychiatry. 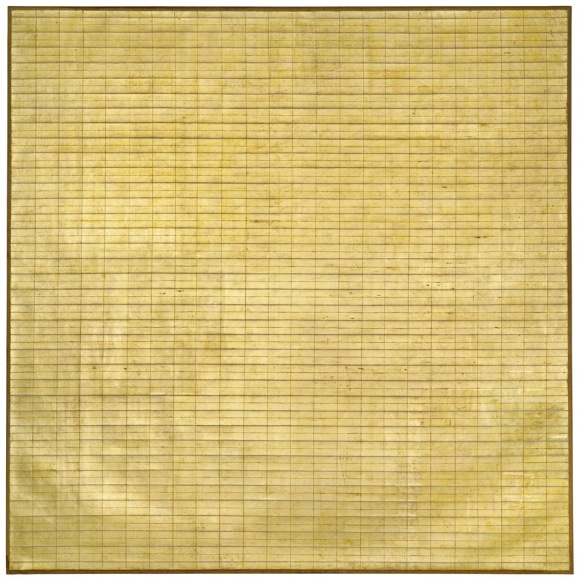 Discovering Martin’s situation triggered my old interest. Martin’s symptoms included auditory hallucinations, spells of depression and catatonic trances. Some say her voices directed almost every aspect of her life, sometimes punitive and sometimes protective. But there are different ways of understanding how the disease affected her work.

This is from Princenthal’s biography Agnes Martin. Her Life & Work (2015):

Although the voices didn’t tell her what to paint – they seemed to steer clear of her work – the images that came to her through inspirations were fixed and articulate enough to suggest a relationship between visions and voices: she heard and saw things that others didn’t

Martin’s mental health will not be the main focus of my text. But I must say this: I find it really very impressive how she managed to work, making the most beautiful art, having to struggle with such a severe disability. It makes my respect for her – if possible – even greater.

And so, dear reader, be warned: there will definitively be more on Martin in the weeks to come …