Have I ever told you how much I love the art of Yoko Ono? I am used to think of her as a visual performance artist, but she is also a great conceptual writer, just have a look at this: 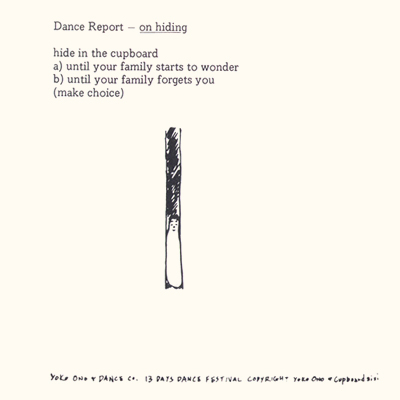 Yoko Ono moved from Japan to the USA with her family in the 1940s, and soon became a leading voice in New York’s most interesting artist circles, which worked with happenings, sound art, poetry and film. Alongside colleagues including George Maciunas, Marcel Duchamp and John Cage and others, Yoko Ono developed totally new modes of expression that questioned the artworld’s increasingly commercial preoccupations, and which left heroic high modernism behind.

She will be exhibiting at Moderna Museet in Stockholm this summer